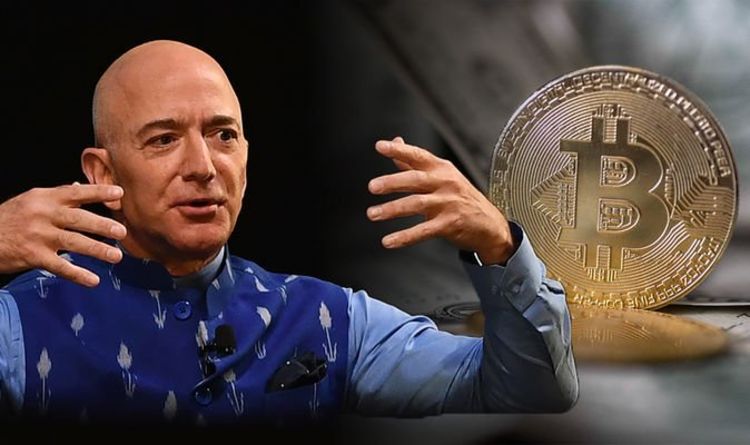 Bitcoin price: Why is Bitcoin going up? Will Amazon accept BTC by 2022?

The returns this year are up by 33.55 percent, a welcome change after the cryptocurrency saw a dip below $30,000 in recent weeks.

This has meant BTC has broken out of a six-month-long downtrend on the RSI, in what investors are hoping is the start of a major trend reversal.

Also on the up are Ethereum, XRP and Cardano, in what has been a positive day for cryptocurrencies.

But what’s behind the monumental rise in Bitcoin?

One element of Bitcoin’s resurgence after months of uncertainty could be the suggestions Amazon could start accepting BTC payments.

Marcus Sotiriou, Sales Trader at the UK based digital asset broker GlobalBlock told Express.co.uk: “According to an insider, Amazon is looking to accept Bitcoin payments by the end of the year.

“They explained that once a fast and established method of payment for Bitcoin has been established, it would move on to other cryptocurrencies like Cardano, Ethereum and Bitcoin Cash. “

The insider said: “It won’t take long because the plans are already there, and they have been working on them since 2019.”

The insider also told City AM: “This isn’t just going through the motions to set up cryptocurrency payment solutions at some point in the future – this is a full-on, well-discussed, integral part of the future mechanism of how Amazon will work.

“It begins with Bitcoin – this is the key first stage of this crypto project, and the directive is coming from the very top… Jeff Bezos himself.”

The insider also claimed Amazon is looking into creating its own cryptocurrency by 2022.

Over the past few months Bitcoin was falling, with a range of factors negatively affecting the cryptocurrency.

There was a crackdown on Bitcoin mining in China due to the excessive energy usage it takes.

According to the Cambridge Center for Alternative Finance (CCAF), Bitcoin currently consumes around 110 Terawatt Hours per year.

This equates to 0.55 percent of global electricity production.

This level of energy is approximately the annual energy usage of small countries like Malaysia or Sweden.

Elon Musk announced Tesla would stop accepting BTC, and there have been increases in regulation across the globe having a knock-on effect across the crypto sphere.

Today’s upward trend could turn bullish – however, BTC needs to increase yet further for that to happen.

Mr Sotiruou explained: “Bitcoin needs to recover the range high of $42,000 approximately to be technically bullish.”

Time will tell if the cryptocurrency rebounds to reach those levels again.