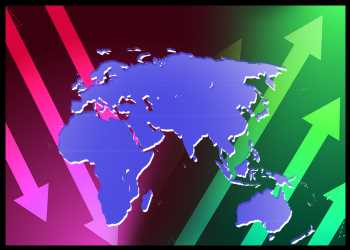 Asian stock markets are trading mixed on Wednesday, following the broadly negative cues overnight from Wall Street, on renewed concerns about the impact of the coronavirus Omicron variant on global economic recovery and as traders await the U.S. Federal Reserve’s announcement on when it would stop buying assets and start raising interest rates. Asian Markets closed mostly lower on Tuesday.

The WHO chief told reporters that 77 countries have now reported cases of Omicron and warned that the new variant is spreading faster than previous strains.

The outlook for monetary policy continued to weigh on the markets as the Federal Reserve’s two-day meeting got underway. With inflation remaining at an elevated rate, the Fed is widely expected to accelerate its timetable for reducing bond purchases.

The European Central Bank, the Bank of England and the Bank of Japan are also scheduled to announce their monetary policy decisions this week.

The Australian stock market is modestly lower on Wednesday, extending the slight losses in the previous two sessions, with the benchmark S&P/ASX 200 staying above the 7,400 level, following the broadly negative cues overnight from Wall Street, as gold miners and technology stocks are weighing down the market.

Omicron worries also persists and investors looked ahead to a Federal Reserve meeting amid expectations the central bank will announce plans to accelerate its timetable for reducing bond purchases.

Among major miners, BHP Group and Fortescue Metals are edging down 0.2 percent each, while OZ Minerals is losing almost 1 percent. Rio Tinto and Mineral Resources are edging up 0.4 percent each.

Oil stocks are higher. Woodside Petroleum and Origin Energy are edging up 0.3 percent each, while Santos is gaining almost 1 percent and Beach energy is flat.

In the tech space, WiseTech Global is losing almost 1 percent and Zip is slipping more than 3 percent, while Afterpay, Appen and Xero are declining more than 2 percent each.

Among gold miners, Gold Road Resources and Northern Star Resources are declining almost 2 percent each, while Evolution Mining is slipping 3.5 percent, Resolute Mining is down almost 3 percent and Newcrest Mining is losing more than 1 percent.

In economic news, consumer confidence in Australia held in positive territory in November, the latest survey from Westpac Bank revealed on Wednesday as its index for sentiment slipped 1.0 percent to a score of 104.3 – remaining above 100 and in the green.

In the currency market, the Aussie dollar is trading at $0.711 on Wednesday.

The Japanese stock market is slightly lower on Wednesday after being in the green most of the morning, extending the losses in the previous session, with the benchmark Nikkei index staying above the 28,400 level, following the broadly negative cues overnight from Wall Street, on lingering concerns about the impact of the coronavirus Omicron variant on global economic recovery.

Market heavyweight SoftBank Group is gaining 2.5 percent, while Uniqlo operator Fast Retailing is losing more than 1 percent. Among automakers, Honda is edging up 0.6 percent and Toyota is gaining more than 3 percent after it announced an investment of $70 billion to electrify its vehicles by 2023.

In the tech space, Screen Holdings is edging up 0.5 percent, while Advantest is losing more than 2 percent and Tokyo Electron is down almost 1 percent.

In the banking sector, Sumitomo Mitsui Financial and Mizuho Financial are edging up 0.5 percent each, while Mitsubishi UFJ Financial is gaining almost 1 percent.

Among the major exporters, Panasonic is gaining more than 1 percent, Sony is adding almost 2 percent, Canon is edging up 0.1 percent and Mitsubishi Electric is up almost 1 percent.

Among the other major losers, Kawasaki Kisen Kaisha is losing more than 5 percent, while Nippon Yusen K.K. and Mitsui O.S.K. Lines are declining almost 4 percent each.

In the currency market, the U.S. dollar is trading in the higher 113 yen-range on Wednesday.

On Wall Street, stocks saw further downside during trading on Tuesday following the sharp pullback seen in the previous session. With the drop, the S&P 500 continued to give back ground after ending last Friday’s trading at a record closing high.

The major European markets also moved to the downside over the course of the session. While the U.K.’s FTSE 100 Index edged down 0.2 percent, the French CAC 40 Index fell 0.7 percent and the German DAX Index slumped 1.1 percent.

Crude oil futures dipped Tuesday on concerns about the outlook for energy demand due to renewed restrictions amid rising new cases of the Omicron variant of the coronavirus. West Texas Intermediate Crude oil futures for January ended down by $0.56 or 0.8 percent at $70.73 a barrel.