AMC wants to issue 25 million more shares after a 2,300% rally this year, to help it chase acquisitions 'hard'

AMC Entertainment has asked shareholders to let it issue another 25 million shares in the wake of the stock's 2,300% rally, saying it will fortify the movie-theater chain with the means to chase acquisitions "hard" and turn itself around.

"If you arm us with the tool – meaning stock as the tool – to go find value-creating opportunities for AMC shareholders, we can do that," AMC CEO Adam Aron said in YouTube interview with Trey's Trades on Thursday night.

The cinema chain will put the proposal to a vote at its July 29 annual meeting, AMC said in a statement to investors. The company does not plan to issue the shares until 2022, it said, despite 25 million AMC shares being worth more than $1 billion on Friday.

AMC stock was down 5.2% in pre-market trading on Friday, having fallen 17.9% to $51.34 by the previous day'smarket close. The stock was nonetheless around 2,300% higher than the $2.10 it closed out 2020 at, after retail traders organizing themselves online sent the price soaring in recent days.

The share-issuance request followed several sales that have raised hundreds of millions of dollars for AMC but diluted current shareholders' holdings.

Speaking to Trey Collins of Trey's Trades, Aron said: "If we are not armed with this tool, then you're tying our hands behind our back, and you'll make it just that much harder for us to land some of these attractive opportunities that could benefit us all."

He said AMC is chasing potential acquisitions "hard", saying they could include ArcLight and Pacific Theatres locations. Aron also said the money would be used to cut down debt.

AMC sold 11.6 million shares on Thursday for $587 million, triggering volatility for the stock. That followed a $230 million sale of 8.5 million shares to Mudrick Capital, which later resold for a profit.

Aron said: "Between those two transactions we raised over $800 million of cash, not to line my pocket or anybody who works at AMC, but to put that money in the treasury of AMC to strengthen AMC." 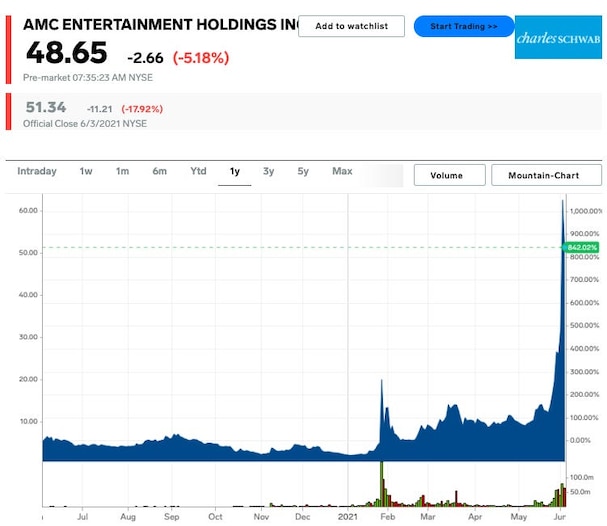