Marines embarked with the 26th Marine Expeditionary in 2018 were on high alert to provide quick reaction forces in the event of violence stemming from the controversial move of the US embassy toJerusalem, according to a military document.

The Wasp-class amphibious assault shipIwo Jima loitered in the North Red Sea for the entire month of May in 2018 after assuming an “elevated crisis response posture” in response to the US embassy move from Tel Aviv to Jerusalem, a command chronology of the 26th MEU detailed.

The command chronology, obtained by Marine Corps Times through a government records request, is a historical archived record of the MEU’s actions and exploits.

During that May, the MEU said it was focused on “high risk embassies” in Amman, Beirut and Cairo, as the US prepared to move the embassy to Jerusalem, according to the chronology.

Marines aboard the Iwo Jima were on standby to provide alert forces for quick reaction troops or Marines for the tactical recovery of aircraft personnel, commonly known as a TRAP mission, the chronology detailed.

Those forces were on standby to react within two hours to six hours of notification of an event that would require their forces to be launched on a mission, the chronology detailed. 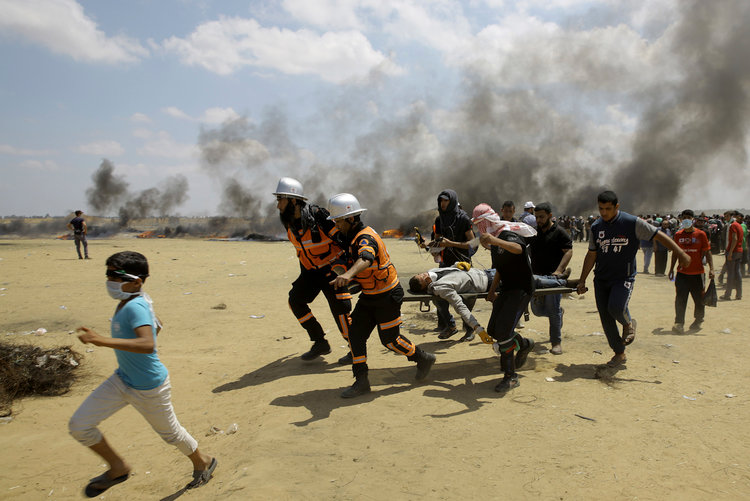 Palestinian medics and protesters evacuate a wounded youth during a protest at the Gaza Strip’s border with Israel, east of Khan Younis, Gaza Strip, May 14, 2018.AP Photo/Adel Hana

President Donald Trump’s decision to move the American embassy from Tel Aviv to Jerusalem, announced in early December 2017, stoked international condemnation, even from US allies. Trump also announced the US would recognize Jerusalem as Israel’s official capital.

Israel had captured east Jerusalem from Jordan during the 1967 Six-Day War, and in 1980, the Knesset — Israel’s unicameral parliament — passed a law declaring Jerusalem as the united capital of Israel.

The annexation of Jerusalem is not internationally recognized, and Palestinians see east Jerusalem as a capital of their future state — should a two state solution to the Israeli-Palestinian conflict come to fruition.

Deadly protests in the Gaza strip leading up to and during the opening of the US embassy in Jerusalem claimed the lives of 58 Palestinians and injured more than 2,700,CNN reported.

The MEU never mobilized its forces to evacuate personnel during the embassy move, but it did practice such an operation a month prior in Jordan.

On April 25, 2018, as part of the annual Eager Lion exercise in Jordan, the 26th MEU carried out a “full mission profile” of a noncombatant evacuation operation, according to the chronology.

During the exercise, Marine inserted security augments and evacuated 36 Department of State and military personnel to the Iwo Jima, the chronology detailed. The 36 evacuated personnel received a tour of the ship before departing.

The 26th MEU also participated in the biennial exercise held in Israel known as Juniper Cobra in March 2018, several months before the embassy move to Jerusalem.

Marine Corps Times reached out to the Marine Corps, US Central Command and US European Command regarding the 26th MEU’s response to the Jerusalem embassy move and did not receive a response.