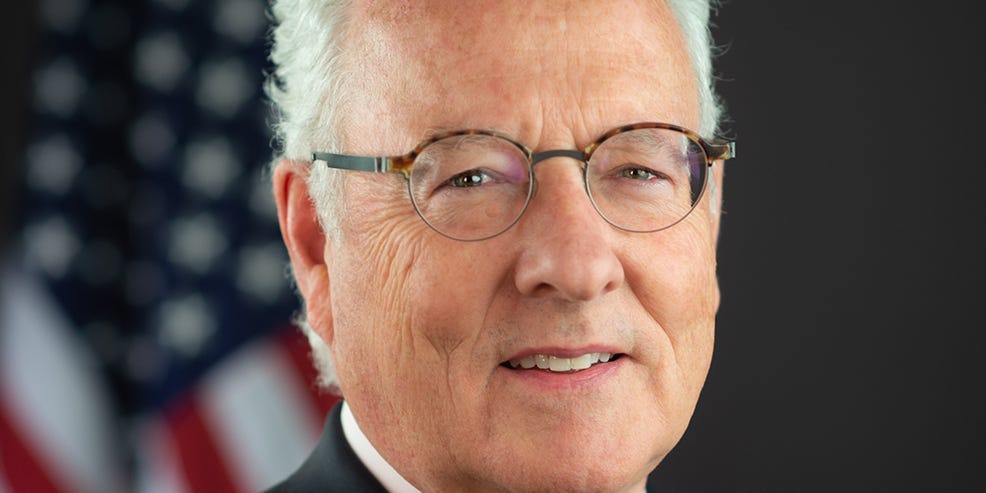 A top SEC official was receiving a $1.6 million law-firm pension from Simpson Thacher that was 7 times his government salary. It shows why cracking down on 'golden parachutes' is so hard.

When capital-markets lawyer Bill Hinman joined the SEC in 2017, his list of clients — from Alibaba and Google to JPMorgan and Wells Fargo — drew media attention.

What didn’t get much press was the nearly $1.6 million annual pension Hinman would receive from Simpson Thacher & Bartlett, payments that dwarfed the government salary he received for leading the Division of Corporation Finance. While Hinman had retired from Simpson, he rejoined the firm earlier this month after years of helping drive regulatory changes that were targeted at making it easier for companies to go public.

READ MORE: The SEC just approved a new way for companies to go public and raise cash. Here’s how it works, and why it could transform how hot tech companies think about IPOs.

“That payment was very generous, and it’s not always what I see with a pension plan,” said Virginia Canter, a former SEC ethics lawyer now with Citizens for Responsibility and Ethics in Washington. An ethics official signed off on the arrangement but Canter said it is “a little unsettling” for Hinman to have received such big payments from the firm that employed him before and after government service.

Since the 1960s, it has been illegal for federal workers to have their salaries padded by private-sector employers, though that ban doesn’t include pensions. Kathleen Clark, a law professor at Washington University, said the public was skeptical that so-called “dollar-a-year men,” who took a $1 salary from the government while taking a more generous one from the private sector, were truly acting in the nation’s best interest.

There’s no evidence that Hinman granted special treatment to his former law firm or clients. While the Division of Corporation Finance issues guidance, proposes regulations and reviews securities filings to make sure companies are obeying accounting and disclosure rules, it does not take enforcement action.

But Hinman’s arrangement is a classic example of the questions that can arise with each turn of the “revolving door” between government and private industry, which nearly every president has vowed to scrutinize even as they have invited thousands of lawyers, lobbyists and business leaders into government to help drive their agendas forward.

The episode also illustrates the challenges that come with trying to police potential conflicts of interest for the thousands of government appointees about to join the Biden administration.

Read more: Trump is becoming an ‘untouchable client.’ Here’s how law firms are turning on the president, from calling for his removal to dumping his business.

For years, companies including Morgan Stanley, Blackstone, and JPMorgan Chase have allowed their senior executives to cash out of equity-based parts of their compensation if they take a role in government, according to the Project On Government Oversight. Gary Cohn and Elaine Chao were criticized for taking advantage of such provisions, Vox reported.

It’s not just financial institutions that do it. Rex Tillerson’s equity vesting arrangement with Exxon when he became Secretary of State also drew scrutiny. In the 1980s, the Justice Department sued Boeing for making special payments to employees going into government service, and women who worked at the law firm Jones Day have accused the firm of giving financial “cushions” to certain lawyers who joined the Trump administration.

Change might be coming. Among the several orders President Joe Biden signed on his first day was a requirement that officials sign a pledge that prohibits them from accepting a cash or stock bonus from their employer as a reward for joining the government. Biden’s “golden parachute” ban is part of an ethics pledge that has been praised by good-government groups.

Craig Holman, an ethics expert at the consumer advocacy group Public Citizen, is a fan of Biden’s rule. He said it would have prevented former Treasury secretary Jack Lew from taking a nearly $1 million bonus when he left Citigroup to join the Obama administration. At the same time, he acknowledged that it wouldn’t cover generous pensions or certain other good-bye payments.

“It can easily be evaded,” he said. “Cracking down on golden parachutes is difficult.”

Biden’s golden parachute ban prohibits appointees from accepting payments that are “limited to individuals accepting a position in the United States Government.” That would appear to bar payments to executives from some companies, like MSCI, which only allows early vesting for certain employees who take roles in the federal government, according to a 2019 SEC filing.

But some companies’ equity compensation plans allow employees to take “golden parachutes” in a broader set of cases. Morgan Stanley allows its directors to cash out in any instance where they take a public-service job or role with an entity like FINRA and are required by law or regulation to divest, an exhibit to its 2018 annual report said.

How much is too much?

Even some advocates for clean government are wary of going too far. On one hand, regulators benefit from the views of people who are up-to-speed on market norms and innovations. On the other hand, government employees should be focused on public service, not on laying the groundwork for a lucrative return to the private sector.

Hinman’s pension, while enormous, isn’t unique. Keith Higgins, a former partner at Ropes & Gray who ran the same division of the SEC during the Obama administration, got an annual pension from Ropes of about $75,000. More recently, two Gibson Dunn partners who served in the Trump administration, Nicola Hanna and Eugene Scalia, disclosed annual pension payments of $169,000 and $311,000, records show.

Some recipients of Big Law pensions have tried to reduce the risk of a conflict. Mary Jo White, a partner at Debevoise & Plimpton who led the SEC for part of the Obama administration, opted to take four years of her pension entitlement as a lump sum at the start of her tenure instead of taking a payment every year. Like Hinman, she also returned to her law firm after government service.

It’s possible that Simpson’s partnership agreement prohibited Hinman from doing the same thing. A Simpson partner who took a federal judgeship, Mary Kay Vyskocil, said as much in a questionnaire. Caroline Fatchett, a spokeswoman for the firm, said Hinman’s pension was “similar to other retiring partners” and received the blessing of SEC ethics counsel.

There is an important difference between Hinman’s pension and some of the golden parachutes described in this story, said Clark: a pension isn’t conditioned on someone going into government. Still, she said, there is an issue of public perception.

“The person on the street, I think, would be concerned,” she said.