A Sweet Tomatoes restaurant that was temporarily closed due to the Covid-19 pandemic is seen on the day that Garden Fresh Restaurants announced that it will not reopen its 97 Sweet Tomatoes and Souplantation locations across the United States.

So where’s their place in a hands-off world?
It’s been just over 80 years since America got its first taste of the buffet. Now, thanks to the novel coronavirus, this subset of the restaurant industry is facing an increasingly uncertain future, and Americans may have to swallow the idea of losing the ultimate symbol of dining freedom.

While restaurants are firing up everything they can think up to survive the pandemic, from curbside takeout and deliveries to catered drive-in movie theaters, the era of do-it-yourself dining could be doomed.

The first signs of despair came in mid-March, when the US Food and Drug Administration answered a social distancing question on its website: “How do I handle self-service food buffets such as salad bars in a retail setting related to COVID-19?”
While stating there was no evidence to support the transmission of the virus from food or food packaging, the FDA said it recommended “discontinuing self-service buffets and salad bars until these measures are lifted.”

Then, on an April call with industry members to discuss the best practices, Frank Yiannas, the FDA’s Deputy Commissioner for Food Policy and Response, gave a more blunt directive.
Retailers should “discontinue operations such as salad bars, self-service buffets or beverage service stations that require customers to use common utensils or dispensers,” he said.
That was it for Souplantation, an all-you-can-eat buffet chain also known as Sweet Tomatoes. On May 7, the company announced the immediate closing of all 97 restaurants stretching from the Pacific northwest to Miami, as a direct result of Covid-19. 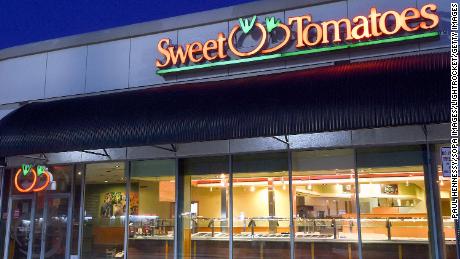 “The word ‘discontinue’ is not a good word for any business,” John Haywood, chief executive officer of parent company Garden Fresh Restaurants, told CNN in an email. “It became clear that our service model would not be allowed soon, if ever.”
Haywood said as a result of the pandemic, “sales collapsed for two weeks prior to our closure on March 15 despite our very passionate guest base and enhanced sanitation tactics.”
“Our average per-location daily guest counts went from 700 per day to less than 200,” he said. “This pre-closure guest behavior, and consumer research conducted during April, clearly indicated that the majority of guests will not be comfortable with any type of salad bar or buffet for some time.”

We will miss you. pic.twitter.com/75mS8GeQso

An FDA spokesperson referred CNN’s questions about additional guidance to state and local agencies, which the spokesperson said have primary oversight.

Reopening on a case-by-case basis

Not all companies took the same route as Souplantation.
Golden Corral, the “endless buffet” of everything from fried chicken to Gummy Bears at some 500 locations nationwide, has started reopening on a case-by-case basis where allowed.
“We are prepared to temporarily provide our guests an enjoyable Golden Corral experience delivered in new ways, including cafeteria-style, where we serve you on our buffet lines, or family-style, where our servers bring an endless buffet of Golden Corral favorites to your table,” the company says on its website. 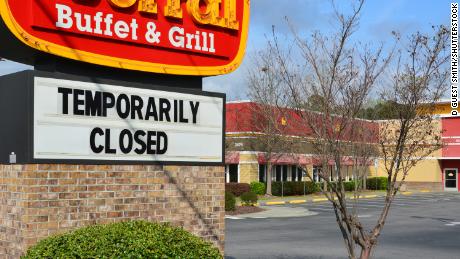 Meanwhile, rivals, like HomeTown Buffet and its sister chain, Old Country Buffet, remain closed, with no stated timeline for reopening.
And then there’s industry powerhouses, like hotel-casino giant MGM Resorts International, owner of Las Vegas’s Bellagio, Mandalay Bay and the MGM Grand among other legends of the Strip. These hotels have long been home to a concentration of the best and biggest buffets.
Like Golden Corral, MGM said in a safety plan released last week that until further notice, it will suspend “any self-service buffet-style food and beverage offerings,” instead requiring employees to dish out the finished product. Additionally, the casino conglomerate, which also includes Borgata in Atlantic City, New Jersey, is suspending buffets “in table games areas.”
When it comes to the eventual reopening of salad bars or buffets — if they come at all — the challenge will be maintaining social distancing in order to minimize direct person to person spread, said Erin DiCaprio, a virologist who specializes in community food safety at the University of California, Davis.
Along with installing “sneeze guards” in places that don’t already have them, staffers should plan on switching out commonly used utensils to minimize cross-contamination risks, DiCaprio told CNN.
“Where feasible, perhaps provide single use utensils for dishing out food,” said DiCaprio, who also recommends installing hand sanitizing stations at the start of self-serve food lines and continued mask wearing. 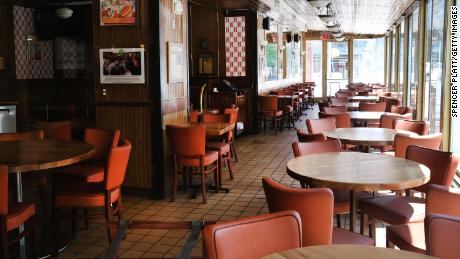 The National Restaurant Association also called for “appropriate barriers” in cafeteria-style dining, in its guide for restarting after Covid-19-related closures, no matter who fills your plate.
“Where salad bars and buffets are permitted by local/state officials, they must have sneeze guards in place,” it reads. “Change, wash and sanitize utensils frequently and place appropriate barriers in open areas. Alternatively, cafeteria style (worker served) is permissible with appropriate barriers in place.”
DiCaprio, who helped launch a comprehensive UC Davis website on Covid-19 and food safety, said she “would eat at a self-serve buffet again in the future.”
But not today.
“Not due to any food safety concerns, but because I want to maintain social distancing due to Covid-19,” she said. “I have been ordering takeout from restaurants and doing (curbside) pickup for groceries since March.”

Haywood told CNN it’s not just buffet-style restaurants that face challenges during the pandemic.
“The fact that we could not reopen is indicative of the incredible challenge the entire restaurant industry faces,” he said. “I really do not believe that most really understand what is about to happen. As a buffet concept, we are just the ‘canary in the mine shaft,’ as the saying goes.”
Source: Read Full Article