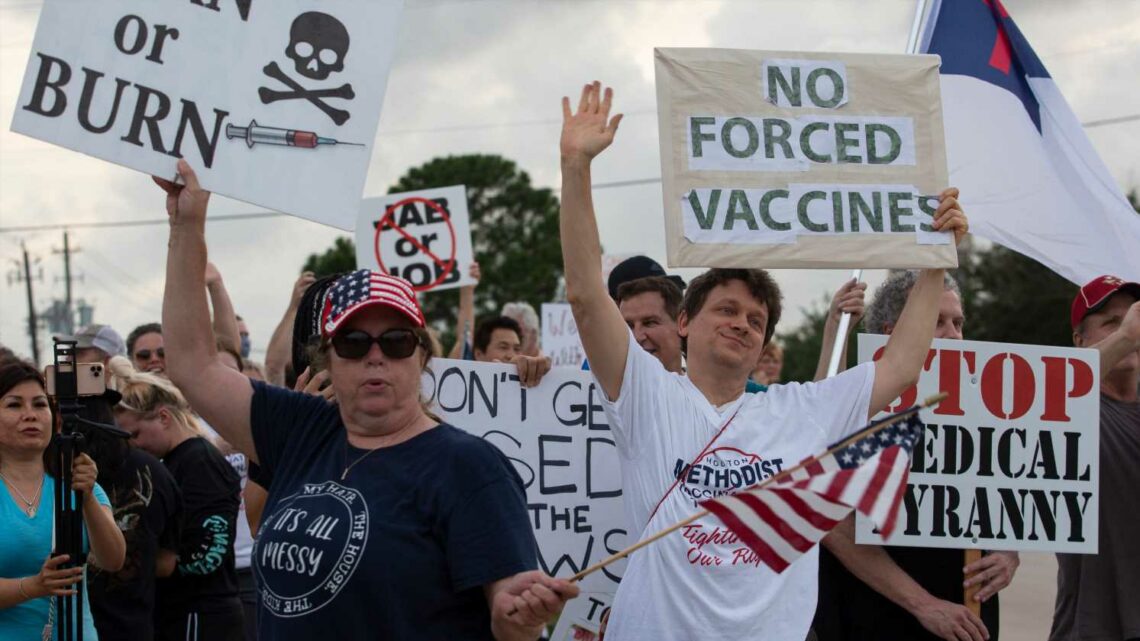 Scores of workers at a Houston hospital system have been suspended and face being fired for refusing the COVID-19 vaccination, a controversial company mandate that has drawn protests and an outcry from those facing termination.

“We are nearly 100% compliant with our COVID-19 vaccine mandate,” Bloom said in an email to staff Tuesday. “Houston Methodist is officially the first hospital system in the country to achieve this goal for the benefit of its patients.”

Bloom said 27 of the 178 suspended workers have received one dose of vaccine, and that he is hopeful they will get the second dose. All are suspended for two weeks and are set to be fired if they fail to be fully vaccinated.

“I wish the number could be zero, but unfortunately, a small number of individuals have decided not to put their patients first,” Bloom said.

An additional 285 employees received a medical or religious exemption, and 332 were granted deferrals for pregnancy and other reasons, Bloom said.

“I feel betrayed a little bit,” Amanda Rivera told KHOU-TV as she left the building Monday. “I worked in the ER. It was crazy during the pandemic. We were short-staffed. The hospital was over capacity with patients. It was just a lot. Now for them to come and do this is like a slap in the face.”

Hospital workers across the nation risked their lives during the pandemic, and many died of the virus. Yet a recent USA TODAY survey of some of the largest hospital networks and public hospitals in the country reveal staff vaccination rates vary widely, ranging from 51% to 91%.

Mandatory vaccination is not popular with lawmakers in Texas. Gov. Greg Abbott signed a law Monday denying state contracts to businesses that require customers to be vaccinated. Vaccine “passports” also are prohibited.

“Texas is open 100%, and we want to make sure you have the freedom to go where you want without limits,” Abbott said.

The Equal Employment Opportunity Commission has issued guidance saying employers have the right to require COVID-19 vaccination, citing a “direct threat” to others in the workplace. Still, more than 100 Houston Methodist employees filed suit against the hospital system last month saying the vaccines are “experimental” and that the mandatory vaccination policy is unfair.

“I cried the whole way out,” Jennifer Bridges, a nurse involved in the lawsuit, told KHOU-TV as she exited the hospital Monday.

Bloom said the science, along with data from 300 million doses already distributed in the U.S. alone, proves the vaccines are safe and necessary “if we are going to turn the corner against COVID-19.” The number of both positive cases and hospitalizations continue to drop across the nation continue to decline, he said, proving the vaccines’ effectiveness.

Bloom said the mandate has been challenged by the media and some outspoken employees. But he said several other major health care centers have followed Houston Methodist’s lead.

“As the first hospital system to mandate COVID-19 vaccines we were prepared for this,” he said. “The criticism is sometimes the price we pay for leading medicine.”