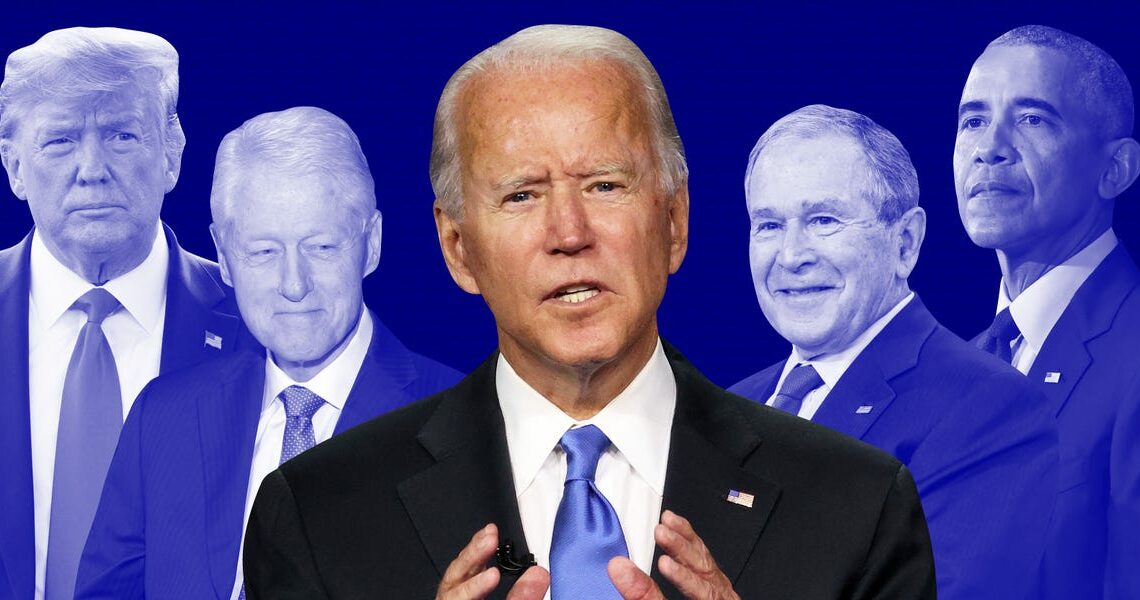 Good morning! Welcome back to 10 Things in Politics, your look at the biggest stories in DC and beyond. Sign up here to receive this newsletter.

Send tips to [email protected] or tweet me at @BrentGriffiths.

Here’s what we’re talking about:

1. ONE HUNDRED PROOF: President Joe Biden has now passed the FDR-inspired first lap of his presidency. Insider decided to compare him with his more-modern predecessors to see how he fares on everything from bill signings and the stock market to rounds of golf.

Here’s a peek at where things stand:

Taking stock of the situation: President Donald Trump lived by the Dow and predicted calamity if he lost. Instead, Biden has been a boon to the markets. If you use the S&P 500, returns are the best they’ve been since JFK was in office. 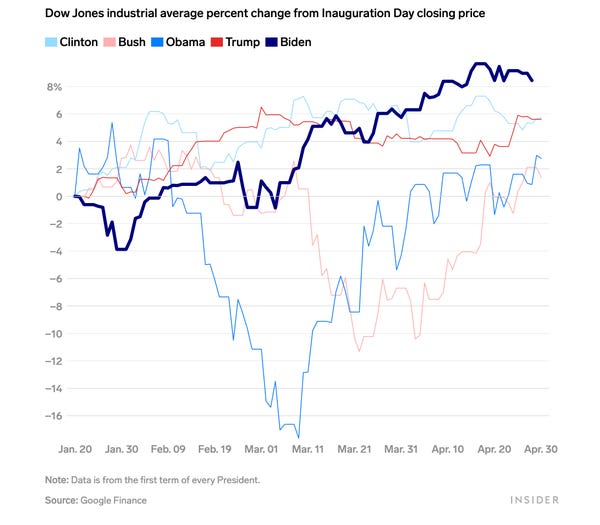 So you want to be pop-u-lar?: Biden is ahead of Trump in terms of overall job approval, but both trailed their recent predecessors by a large margin. This dovetails with the more hyperpartisan era of politics that we’re in.

What’s the bill?: Biden has touted his massive $1.9 trillion relief plan that dwarfs the 2009 stimulus. But if you measure by the total number of laws, the current president is a bit behind.

Sign of the times: Perhaps owing to slim Democratic majorities, Biden has far surpassed his predecessors in another mark: executive orders. In fact, the 17 executive orders he signed on day one were more than either President George W. Bush or President Bill Clinton signed in his first 100 days. (Republicans are not pleased.)

Fore! score: Trump’s love for the links is legion. And in this measure, he remains far ahead of his peers.

See for yourself how the presidents stack up here.

2. This is the law that Rudy Giuliani is sweating: The Foreign Agents Registration Act was originally enacted to thwart Nazi propaganda. Congress has since amended it to police lobbyists. If you’ve heard of it, chances are it’s because the special counsel Robert Mueller used it as a key tool in his investigation. These are the five key things to know.

Key quote: “The days that people assume the department is going to be lax in enforcing FARA are over,” David Laufman, a partner at Wiggin and Dana who was previously a top Justice Department official who oversaw FARA enforcement, told Insider.

3. Associate said Rep. Matt Gaetz had sex with a minor: Joel Greenberg wrote in a letter obtained by The Daily Beast that he and Gaetz paid for sex with a 17-year-old girl and that the pair also paid for sex with women. Greenberg reportedly wrote the letter at the request of the political provocateur Roger Stone, who was said to be trying to secure a pardon for Greenberg from Trump. More on the latest turn here.

5. Mike Pence makes his public return in all-important South Carolina: “The imagery of Pence’s first public campaign-style stop since the 2020 election is impossible to miss to the trained political eye,” Insider’s Tom LoBianco wrote. “He posted up in the backyard of a possible 2024 opponent, former Gov. Nikki Haley of South Carolina, in a key typically early Republican primary state.”

6. Washington moves of the week: Some top communications jobs were filled on both sides of the aisle. Here are some of the other biggest moves this week.

Katie Miller, a former Pence spokeswoman, has joined the Coalition to Protect American Workers; Isabel Aldunate, a Biden 2020 vet, is now deputy associate director for communications in the White House Office of Management and Budget; and Tamara Fucile is now executive director of the Joint Economic Committee under its chairman, Rep. Don Beyer of Virginia.

7. Dozens of people were killed during a stampede at a religious festival in Israel: The cause of the stampede was not immediately clear. Reuters reports that witnesses said some people were “asphyxiated or trampled in a passageway.” Prime Minister Benjamin Netanyahu said he was praying for the victims, calling the incident a “heavy disaster.”

8. Morgan Stanley thinks Biden will get only some of what he’s asking for: Biden wants to pay for his infrastructure proposals with tax increases. But how much will taxes actually go up? Here’s what the investment bank Morgan Stanley predicts:

Speaking of taxes: The president has promised he won’t raise taxes on those earning less than $400,000 annually. But a White House official told Axios that would not apply to someone filing jointly with a spouse if their combined income surpassed that amount.

9. The average net worth in America: American families on average have a net worth of $748,000, according to the most recent Federal Reserve data. But the median net worth, $121,700, tells a different story — and may be a more accurate representation of a typical American family. See a full breakdown of net worth by age, race, education, and location.

10. Draft night and some drama: As expected, Clemson QB Trevor Lawrence went to the Jacksonville Jaguars as the first pick in the 2021 NFL draft. Four quarterbacks followed him in the next 14 picks. Alabama QB Mac Jones fell from an expected third to 15th, costing him an estimated $19 million.

Today’s trivia question: With the Carters in the news, what practice did President Jimmy Carter ban when he was in office?

That’s all. Have a great weekend!